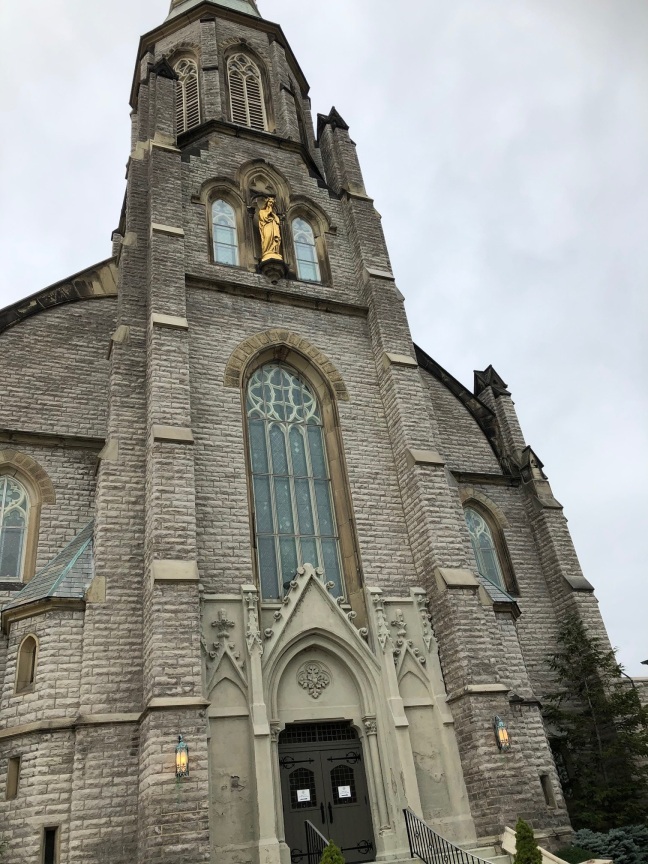 St. Mary’s Catholic Church was founded by German immigrants who had been worshiping at Holy Angels. Holy Angels had been originally comprised of both English and German immigrants, but the German immigrants broke off from the English group to form their own congregation and the second Catholic Parish in Sandusky, OH. The property for the parish was purchased on June 20, 1855. The original church itself was finished in 1856.

Originally, the Germans who had come to America were led by Father John P. Dolweck, who had been appointed by the Right Reverend Louis Amadeus Rappe, Bishop of the Diocese of Cleveland. He was succeeded by Father James J. Hamene. He helped complete the first church and rectory.

By 1857, St. Mary’s also had a school. In 1873, the parish began building a new church under the direction of Father Nicholas Moes, who hired Franz George Himpler to oversee the construction. Seven years later the new church was completed and dedicated to Mary, Mother of Sorrows. It is the largest church in the City of Sandusky. 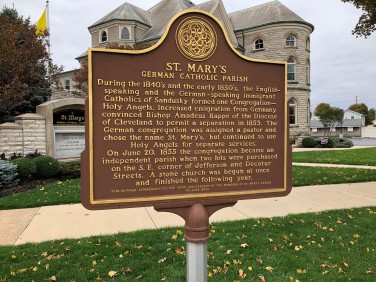 During the 1840’s and the early 1850’s, the English-speak and the German-speaking immigrant Catholics of Sandusky formed on Congregation – Holy Angels. Increased emigration from Germany convinced Bishop Amadeus Rappe of the Diocese of Cleveland to permit a separation in 1853. The German congregation was assigned a pastor and chose the name St. Mary’s, but continued to use Holy Angels for separate services.

On June 20, 1855 the congregation became an independent parish when two lots were purchased on the S.E. corner of Jefferson and Decatur Streets. A stone church was begun at once and finished the following year.

This marker commemorates the 150th anniversary of the founding of St. Mary’s Parish 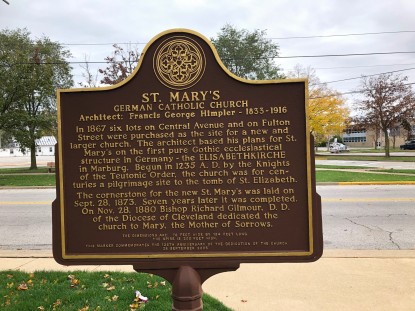 In 1867 six lots on Central Avenue and on Fulton Street were purchased as the site for a new and larger church. The architect based his plans for St. Mary’s on the first pure Gothic ecclesiastical structure in Germany the ELISABETHKIRCHE in Marburg. Begun in 1235 A. D. by the Knights of the Teutonic Order, the church was for centuries a pilgrimage site to the tomb of St. Elizabeth.

The cornerstone for the new St. Mary’s was laid on Sept. 28, 1873. Seven years later it was completed. On Nov. 28, 1880 Bishop Richard Gilmour, D. D. of the Diocese of Cleveland dedicated the church to Mary, the Mother of Sorrows.