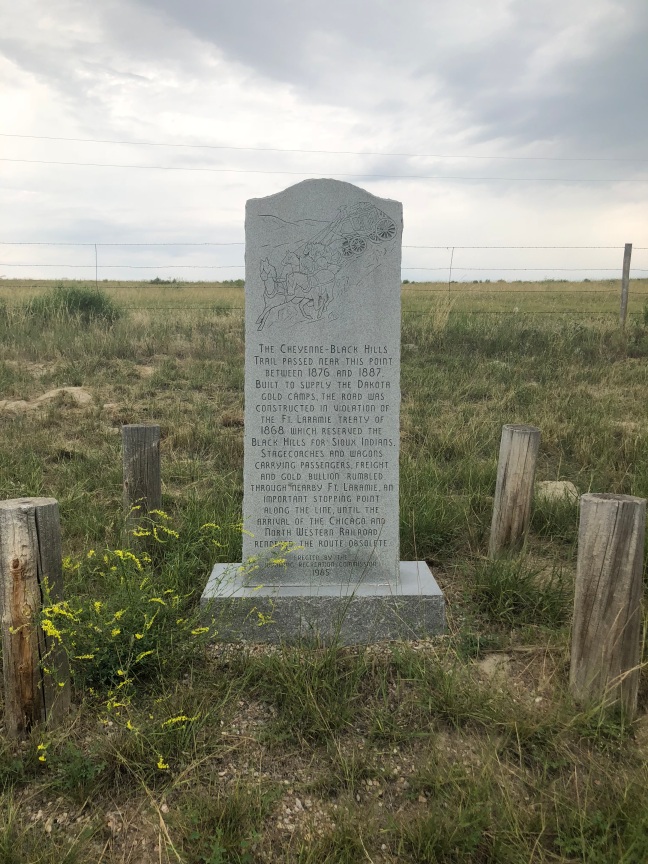 The Cheyenne-Black Hills Stage Route (also known as the Cheyenne-Deadwood Trail) operated between 1876 and 1887, and connected Cheyenne, Wyoming, with Deadwood, South Dakota. It was 200 miles long and was created despite a treaty which had given the Black Hills to the Sioux.

The main reason for starting the trail was that, after the discovery of gold in the Black Hills, a north-south route was needed for people, gold shipments and freight. The trail ran perpendicular to the Overland and Oregon Trails.

Many depredations occurred on the trail since there were a lot of thieves and robbers in the area as well as Sioux trying to protect their land in the Black Hills. Stagecoaches usually were escorted by armed guards. Stage stops were set up at Fort Laramie, Hat Creek Station (near Lusk and Newcastle) and Robber’s Roost. Stages would depart from Deadwood on Tuesdays and Saturdays, and from Cheyenne on Mondays and Thursdays.

Well-known icons of the time like Wild Bill Hickock, Buffalo Bill Cody and Calamity Jane were said to frequent the trail.

The Cheyenne-Black Hills Trail passed near this point between 1876 and 1887. Built to supply the Dakota gold camps, the road was constructed in violation of the Ft. Laramie Treaty of 1868 which reserved the Black Hills for the Sioux Indians. Stagecoaches and wagons carrying passengers, freight and gold bullion rumbled through nearby Ft. Laramie, an important stopping point along the line, until the arrival of the Chicago and North Western Railroad rendered the route obsolete.

Erected by the Wyoming Recreation Commission
1985

Located near Fort Laramie, off U.S. 26 on the north side of the road