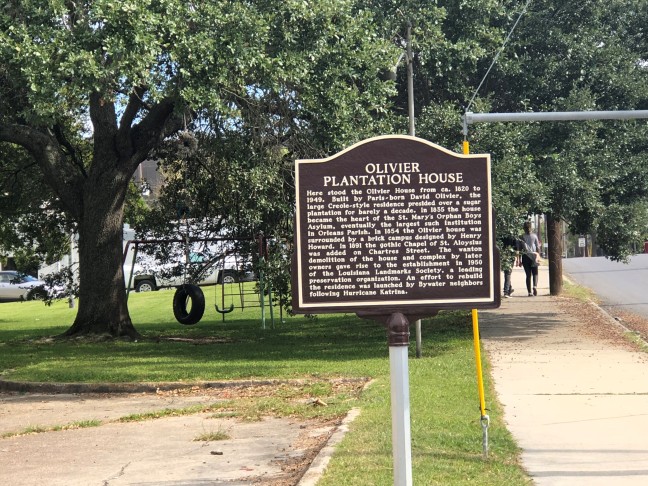 What is now an empty lot in the Bywater neighborhood of New Orleans used to be a plantation owned by Antoine David Olivier, who was born in Lyon, France in 1759. By the 1800s, he was living in America as a wealthy man. In the 1820s, he began building a lavish, West Indies-influenced, French Creole home near the Mississippi River. The house was part of an extensive plantation complex. In fact, the property was 2 arpents wide and 40 arpents deep. An arpent is an old French unit of land and is equivalent to about 1 acre. Olivier died in 1844, but the home had been sold before then.

In 1833, Etienne Carraby bought the place. It passed through several hands until Albert Piernas sold it right after the Civil War to the Sisters of the Order of the Holy Cross, which converted it into a boy’s orphanage.

During this time, the exterior buildings were torn down, including the kitchen, pigeonniers and stables. It became St. Mary’s Orphan Asylum, and a large dormitory wing was added to the house. The orphanage closed in the 1930s due to Huey P. Long placing most social services under the handling of the State of Louisiana. The building had begun to deteriorate, and it was eventually torn down in 1949.

Yet, there was some controversy to tearing this historical plantation down. A local historian tried to stop the demolition by talking to the contractor right before the bulldozer was set to tear it apart. The contractor and the leaseholders gave the historian a few weeks to try and save the property. He along with a few other interested parties tried everything from attempting to get a company to renovate the property to raising money.

When no plans worked, they instead worked to salvage some of the architecture, and some final pictures were taken. Yet, the simple act of tearing down an old building would create a coalition dedicated to preserving Louisiana historical places.

You can see pictures of the original building on this website. You can also read how the demolition of this plantation led to the creation of the Louisiana Landmarks Foundation in this article. 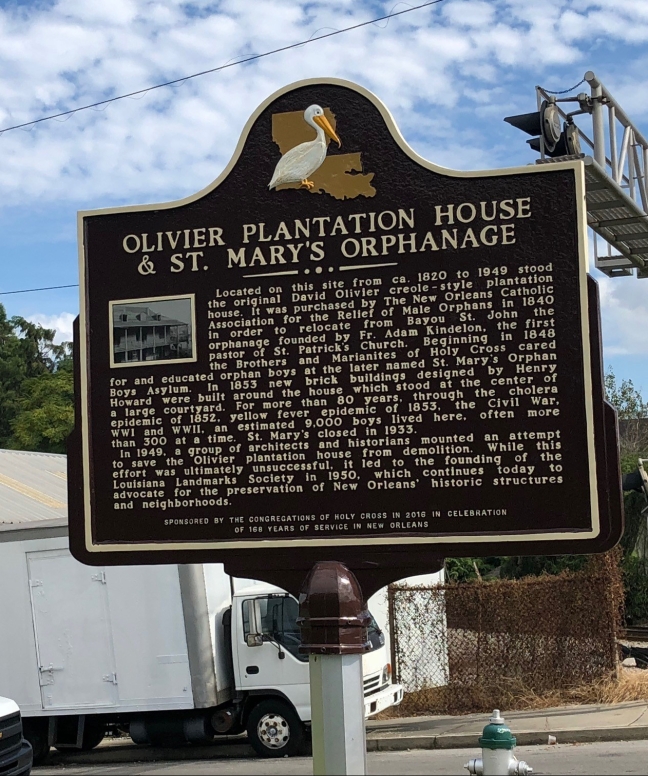 One side: Here stood the Olivier House from ca. 1820 to 1949. Built by Paris-born David Olivier, the large Creole-style residence presided over a sugar cane plantation for barely a decade. In 1835 the house became heart of the St. Mary’s Orphan Boys Asylum, eventually the largest such institution in Orleans Parish. In 1854 the Olivier house was surrounded by a brick campus designed by Henry Howard. In 1891 the gothic Chapel of St. Aloysius was added on Chartres Street. The wanton demolition of the house and complex by later owners gave rise to the establishment in 1950 of the Louisiana Landmark Society, a leading preservation organization. An effort to rebuild the residence was launched by Bywater neighbors following Hurricane Katrina.

Other side: Located on this site from ca. 1820 to 1949 stood the original David Olivier creole-style plantation house. It was purchased by The New Orleans Catholic Association for the Relief of Male Orphans in 1840 in order to relocate from Bayou St. John the orphanage founded by Fr. Adam Kindelon, the first pastor of St. Patrick’s Church. Beginning in 1848 the Brothers and Marianites of Holy Cross cared for and educated orphan boys at the later named St. Mary’s Orphan Boys Asylum. In 1853 new brick buildings designed by Henry Howard were built around the house which stood at the center of a large courtyard. For more than 80 years, through the cholera epidemic of 1852, yellow fever epidemic of 1853, the Civil War, WWI and WWI, an estimated 9,000 boys lived here, often more than 300 at a time. St. Mary’s closed in 1933.

In 1949, a group of architects and historians mounted an attempt to save the Olivier plantation house from demolition. While this effort was ultimately unsuccessful, it led to the founding of the Louisiana Landmarks Society in 1950, which continues today to advocate for the preservation of New Orleans’ historic structures and neighborhoods.