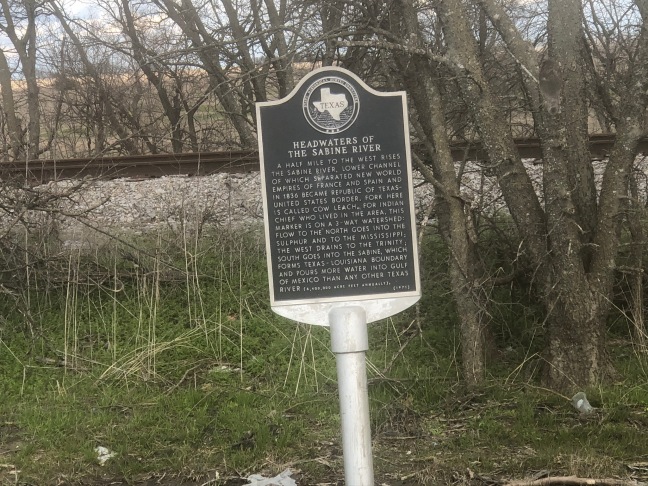 The Sabine River is over 500 miles long and moves from Upper East Texas to the east and empties into the Gulf of Mexico. It starts in Hunt, Collin and Rockwall counties, and then flows towards Logansport, Louisiana, before it finally discharges near Orange, Texas. This river had served as the boundary between multiple territories, including the United States, Mexico, Spain and France.

The original name of the river was Sabinas, the Spanish name for red cedars, which are known to grow on its banks.

A half mile to the west rises the Sabine River, lower channel of which separated New World empires of France and Spain and in 1836 became Republic of Texas – United States border. Fork here is called Cow Leach, for Indian chief who lived in the area. This marker is on a 3-way watershed: flow to the north goes into the Sulphur and to the Mississippi; the west drains to the Trinity; south goes into the Sabine, which forms Texas-Louisiana boundary and pours more water into Gulf of Mexico than any other Texas river (6,400,000 acre feet annually).