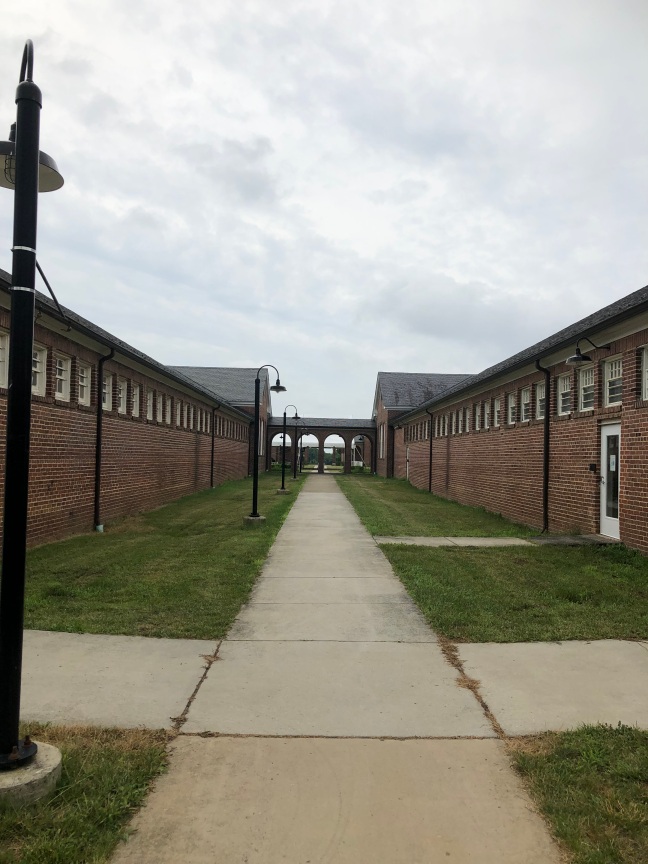 The historical marker commemorates the imprisonment of 70 suffragists during 1917. The women had been peacefully picketing on the White House sidewalk and were known as the Silent Sentinels.

The Washington, D.C., police arrested the women with the charge of obstructing traffic. They were given the choice of paying a $25 fine or going to jail. They refused to pay the fine since they considered it an admission of guilt. So, the women were jailed at the Occoquan Workhouse.

The suffragists were treated poorly at the workhouse, housed in rat-infested cells and given food that had maggots. They were forced to suffer physical and psychological violence.

On November 14, 1917, the superintendent of the workhouse told the guards that they could beat the suffragists. Then on November 15, 1917, 20 women were subject to severe assaults and torture. These included activists Lucy Burns and Dorothy Day. Many of the prisoners suffered severe repercussions. Alice Cosu had a heart attacked, and Dora Lewis was knocked unconscious.

Due to the brutality suffered, many consider this the turning point of the suffragist movement.

In the nearby Occoquan Workhouse, from June to December, 1917, scores of women suffragists were imprisoned by the District of Columbia for picketing the White House demanding their right to vote. Their courage and dedication during harsh treatment aroused the nation to hasten the passage and ratification of the 19th Amendment in 1920. The struggle for woman’s suffrage had taken 72 years.

Known as the “Gray Ghost”, John S. Mosby was part of the Confederate Army’s 43rd Virginia Cavalry Battalion during the American Civil War. Known as a rabble-rouser, he was head of a partisan ranger unit that was known by several names, including Mosby’s Raiders, Mosby’s Men and Mosby’s Rangers.

The unit was renown for its raids on Union targets and ability to evade capture. During the course of the war, Mosby’s Raiders were able to disrupt Union communications, supply lines and outposts.

A spy working for Mosby, Laura Ratcliffe, in 1863 recommended using a large rock (located in Herndon, VA) as a meeting place where the soldiers could meet after doing raids. Ratcliffe also hid money and messages under the rock, the latter which Mosby credited with helping him escape from capture by Union soldiers.

While Mosby did daring deeds during the Civil War, he was held in contempt by many of his fellow Virginians after the war. He admitted that the Confederacy had lost the war while many others still believed in the “Lost Cause” myth. This myth revolves around the belief that the South was in the right and heroic, and it tries to paint the antebellum South in the best light.

The rock is still there, but it borders a subdivision. Since 2020, the marker on the rock has been missing. It was said to read as follows: “Mosby’s Rangers (43d Bn., Va. Cav.) used this rock as a rendezvous point and met here to divide the spoils after raids. The renowned Southern spy and scout Laura Ratcliffe, who lived nearby, showed this rock to Col. (then Captain) John S. Mosby, CSA, in 1863, and suggested he use it as a meeting place”. 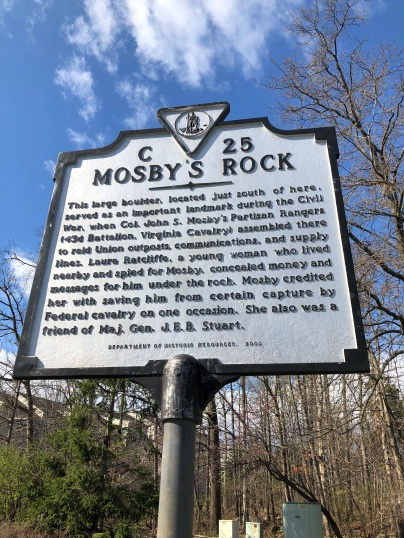 This large boulder, located just south of here, served as an important landmark during the Civil War, when Col. John S. Mosby’s Partisan Rangers (43rd Battalion, Virginia Cavalry) assembled there to raid Union outposts, communications, and supply lines. Laura Ratcliffe, a young woman who lived nearby and spied for Mosby, concealed money and messages for him under the rock. Mosby credited her with saving him from certain capture by Federal cavalry on one occasion. She also was a friend of Maj. Gen.  J.E.B. Stuart.

Named after Toussaint L’Ouverture (1743-1803), the slave leader of the Haitian Revolt, the hospital was completed in 1864. On land formerly owned by slave dealers in Alexandria prior to the Union Army taking control of the area in 1861, the hospital served U.S. Colored Troops. It also treated former enslaved African Americans.

The hospital treated more than 1,400 soldiers from 1864 to 1865. The complex consisted of a cook house, mess hall, dispensary, tents, housing and jail.

A successful protest in 1864 resulted in African American soldiers being interred in Alexandria National Cemetery as opposed to the Contrabands or Freedmen Cemetery.

Named for Toussaint L’Ouverture, the Haitian revolutionary, L’Ouverture Hospital opened early in 1864 near the Freedmen’s barracks in Alexandria to serve sick and injured United States Colored Troops (USCT). Designed by the U.S. Army, the hospital complex could accommodate about 700 patients and occupied the city block just south of here. The hospital also served African American civilians, many of whom had escaped from slavery and sought refuge in Alexandria. In Dec. 1864, more than 400 patients led a successful protest demanding that USCTs be buried in Alexandria National Cemetery, with full honors, rather than at the Contrabands and Freedmen Cemetery.

Willow Shade was the childhood home of Willa Cather, who was renown for writing stories about life on the Great Plains. Willow Shade was actually mentioned in her last novel, Sapphira and the Slave Girl, which was written in 1940.

“The slats of the green window shutters rattled, the limp cordage of the great willow trees in the yard was whipped and tossed furiously by the wind. I had been put in my mother’s bed so that I could watch the turnpike, then a macadam road with a blue limestone facing.”

Cather wrote 12 novels, many works of nonfiction and 6 collections of short fiction. She died on April 24, 1947 in New York City.

This house, built in 1858, was the childhood home of novelist Willa Cather from 1874 to 1883, when she moved with her family to Nebraska. It was the setting of the final chapters of her novel Sapphira and the Slave Girl. Willa Cather was born December 7, 1873, one mile south in the community of Gore then known as Back Creek Valley.

The Town of Occoquan is a suburb of Washington, DC, located in Prince William County, Virginia. The name of the town of derived from the Algonquian Doeg Native American’s word for “at the end of the water”. Long before Europeans settled the Americas, the area was used by indigenous people, using the river for transportation and trade.

During the 1600s, Captain John Smith sailed alone the river, exploring the area. By 1734, the town had public warehouses for tobacco, and by 1749, iron furnaces were put in place along the river by Charles Ewell and John Ballendine. The first automated grist mill in the nation (Merchant’s Mill) operated in the area from 1759 to 1924 when it was destroyed by a fire.

In 1804, Town of Occoquan was formally established – located on the 31 acres that was owned by Nathaniel Ellicott, Luke Wheeler and James Campbell. It became an industrial town with the mills, forges, mercantile shops and shipping of railroad ties. During the 1890s, excursion boats from DC would bring tourists to admire the natural beauty of the area. The town, however, had begun to decline as an industrial town by the mid-19th century. Presently, the Occoquan is known as a destination for ghost walks, antiques, art, dining and more.

Nathaniel Ellicott formally established the town in 1804. Bringing to fruition industrial and commercial developments. Begun ‘at or near the falls of Occoquan’ by John Ballendine c. 1750 the estuary of the Occoquan has attracted the attention of travelers since the time of John Smith. Adjacent lands were patented by the 1850s; copper was being shipped from ‘King’ Carter’s Landing, and tobacco from a publish warehouse by the 1780s.